3 Soft Shirts, 2 Tailored Vests and a Partridge in a Pear Tree!

It's after Christmas and, as promised, I can now share the things I've been sewing and won't spoil any surprises!

I have been sewing vests for my eldest son (ES) for several years and always felt a bit guilty that I didn't have something for my youngest son (YS).  But this year YS asked if I could make him some T-shirts that were narrow, but long...and, of course, really, really soft.  He loaned me one of his favorite shirts (not long enough, but OK otherwise) so I could make a pattern.  Since this was the first version of the pattern I only made three shirts to make sure they were going to work for him. 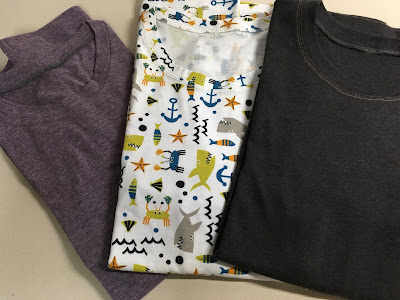 I hunted my favorite fabric haunts for the softest cotton knits I could find.  It seems that the really soft stuff is made for babies!  I gave in and decided that since we were going to be in Florida for Christmas the shark fabric would be appropriate for the place, if not altogether age appropriate.  Turned out...he loved it!!

The purple shirt was actually my 'trial balloon' and fashioned from an old jersey knit bed sheet.  It turned out so well I thought I may as well wrap it up too.  He liked that one as well.

The gray shirt was also going to be a plain, straight forward T, but at a 'Buy Local' Arts and Crafts Fair I found wonderful vegetable mandalas that the artist had printed on squares of muslin.  I couldn't resist and the garlic one ended up on the back yoke of the gray T-shirt.  I used two colors of thread in my twin needle to jazz up the top stitching. 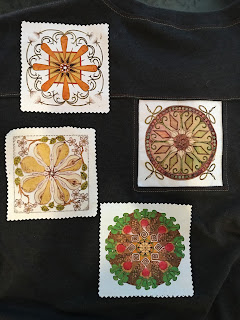 The top right is carrots...moving clockwise...the garlic, then radishes and finally pears.  I am not sure where the other three are going to end up...I just love 'em. 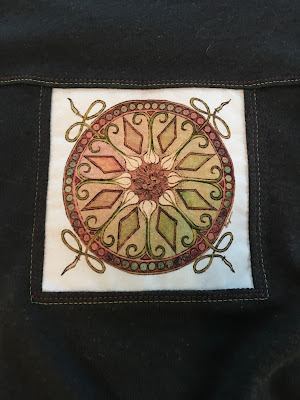 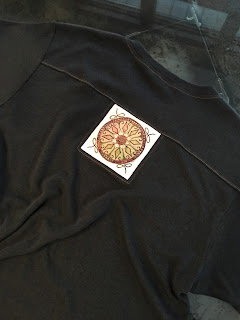 Over the summer ES had been in town and had picked out a couple of vest combinations.  I finished one right away and sent it home with him, but never quite got around to the second one.  So, even though it wasn't a surprise, I put the brown linen vest together for him.  When I was trolling around for soft t-shirt knits I came across a goofy mustache print that I had to do something with.  It ended up as the lining for a black denim vest.

I used my new favorite button application for the black vest.  ES likes the backs of his vests to be kind of jazzy so the brown linen got a paisley print and and the black denim sports a plaid back. 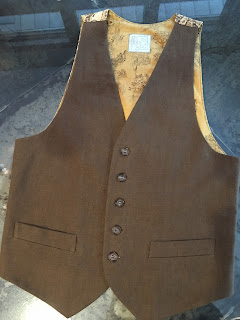 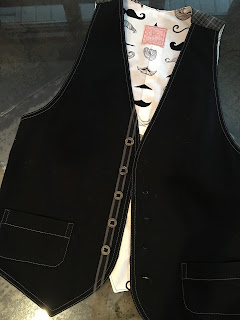 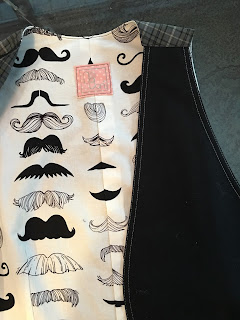 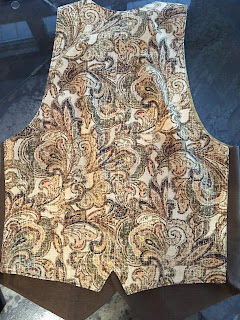 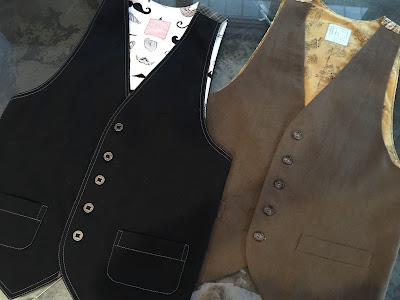 I mentioned that we were going to be spending Christmas in Florida...it was a family reunion of sorts and involved 37 members of my extended family!!!!  Yep, just a quiet island Christmas...NOT!  It was exhausting, and awesome and I will be eating kale for the month of January to undo all the amazing meals that we consumed.

I had worked on a pattern at our ASG retreat for a little envelop contraption to keep jewelry in for traveling. 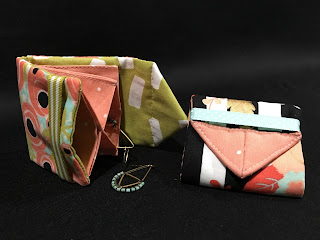 I decided that I would make a few more and give them to all the girls for Christmas.  They are not entirely self-explanatory, so I collected up all the earrings that I don't wear anymore, and the ones that I have been saving to take apart and turn into something else, and filled each envelop with a pair of earrings.  It felt much better to send them off to a new home to be worn, than to keep them hiding in my stash. 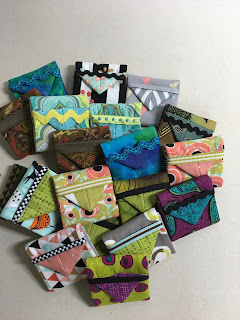 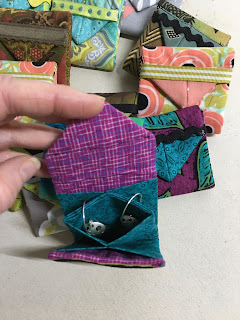 ...And finally, because it ain't Christmas without stockings, I made some tropical socks to hang by our palm tree with care! 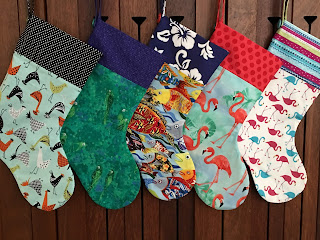 So as you can see I was getting in some sewing room time, but had to wait until all the gifts had been delivered before sharing them here.