Going with the Flo!

I'm so excited!
Rhonda (Rhonda's Creative Life) and I decided to do another "sew together."  If you remember the last one got interrupted by Rhonda's icy tumble in February, which resulted in a broken wrist!  Ouch!  She is all healed up and ready for a month of sewing.

Rhonda suggested that this August we get to the bottom line and do four weeks of pants.  That's right...pants.  I have been sewing for, well, a really long time and pants are still the toughest garment for me to fit.  Just thinking about crotch curves fills me with anxiety...cue the horror movie music!  But we have some fun things planned so maybe it won't be too scary.

Here we go...week one:  "Getting to the Bottom Line"

This week is about our favorite pants pattern.  The one that we have been tweaking and fussing with forever!  I would like to say that my particular fitting opportunity with pants is something that has happened as I've gotten older, but if I am honest, I have always had a pretty flat butt.  Yep, I have never really filled out the rear view.

The problem usually shows up as a whole lot of extra fabric at the top of my leg...where a butt is supposed to be...figuring out how to remove the extra folds of fabric has been an ongoing challenge.  But, last year I read a blog post and the writer was raving about a Style Arc pants pattern, The Barb Pant.  I decided to check it out.  I was just about to pop it into my shopping cart when another pattern caught my eye.  It was the pattern that I have been searching for...cue the heavenly music!  Honest to goodness it is called, "Flat Bottom Flo."  Into the cart it went. 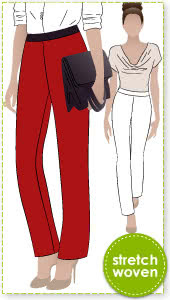 I haven't tried it...I got distracted by Flo...but the reviews I have seen really seem to be positive for this one.  If you have a butt, which I don't, this might be worth a gander.

I have tried several other Style Arc patterns and have found them to be consistently good.  The instructions are straight forward and they use some clever construction techniques that turn out a very professional looking garment. 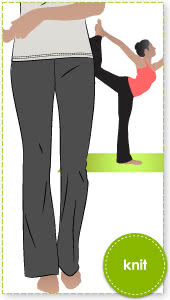 Here's another one I should probably try...The Becky Yoga Pant! 😉

(It is so easy to get distracted on the Style Arc website.) 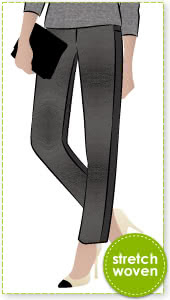 From the illustration she might not seem all that different from other pants patterns out there.  I have to admit my skepticism when I ordered it.  How many pants pattern rabbit holes have I been down! Here I go again!  But, oh, did Flo deliver!

I decided to try it straight out of the package, no changing, no monkeying around, straight up Flat Bottom Flo.  She rocked my world!  I have never had a pair of pants fit so well on the first round.  I had to sit down for awhile and let it sink in... could it be that I had finally found THE ONE?

While the first go was rather breath taking, there were a few of the usual suspects that needed to be dealt with.

One of the things that I figured out after many many miserable pairs of pants, was an alteration that changes the grain line of the legs.  If your knees bow out or knock together you may have experienced this issue.  It shows up as diagonal folds running across the front of the pants making them appear to twist around the knees and shins.  I tried all kinds of things to correct this and finally found this simple change in my Singer Sewing Book: Pants That Fit. 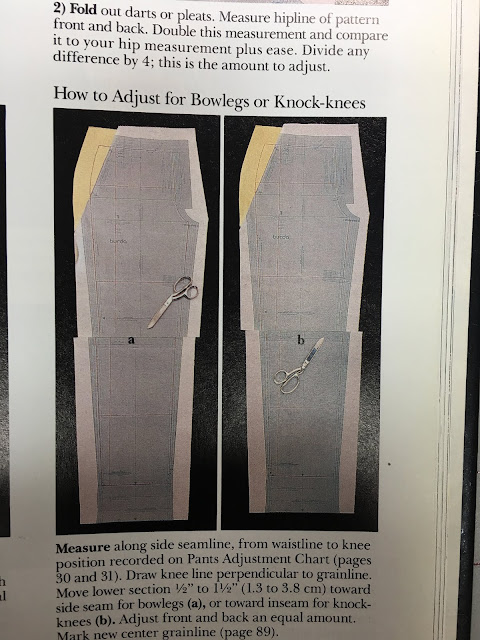 This little 'personal problem' was not something that Flo dealt with, but having done it a million times, it was a quick fix.

So what, you may ask, is the secret that makes Flat Bottom Flo my new favorite pattern?  WELL...
I'm not sure I completely understand what is different, but here's my best guess.
(Warning:  you may want to skip to the end if you have a low tolerance for lyrical waxing about crotch curves!)

1.  The shape of the dreaded crotch curve!!!

Most pants patterns angle up from the crotch seam to the center back.  This is a great idea because it puts a bit of bias stretch across the fullest part of the bum and makes a nice comfy, sittable pair of pants.  But as I mentioned (did I mention?) that I have no bum to accommodate!  So, for me this arrangement ends up with droopy extra fabric across my backside.  Unattractive and vexing!  Flo has figured this out.  Basically there is no 'curve' involved, just straight up the back.  I had actually figured this out, but altering pants that already have an angled crotch curve usually requires not only changing the angle but then dealing with the extra inches that end up around the waist.  It sort of just moves the issue to another location!  Excellent work Flo! 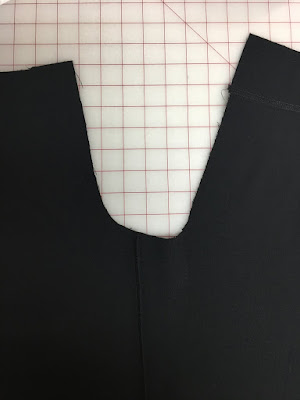 (I know, I used black!  Hope you can get the idea anyway.)

The back crotch seam is basically a straight line.  Or as I like to refer to it, my "L" shaped crotch curve.

You might also notice that the seam angles down from the front to the back.  I don't know that this is particular to 'flat bottoms' or done to recognize the effects of gravity on our lovely tushies!  Anyway, Flo figured that one out, too.

Before I met Flo, I would finish a pair of pants and grab an inch, sometimes more, of fabric under my butt and say lots of bad words.  If I had been willing to live with a silly looking dart going horizontally across the top of my pant leg, I would have solved this problem years ago!   Well, leave it to Flo to think of it!  The back of the pattern is in two pieces, the main leg and a yoke.  This cleverly conceals the 'dart' so no one is the wiser, effectively pulling the #!%^*** folds of fabric up and out of the picture.  Well done Flo! 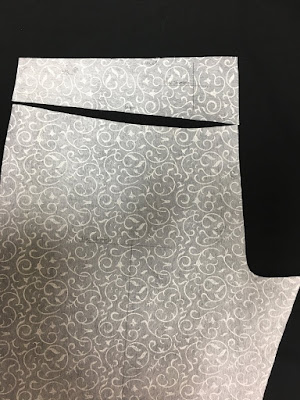 One of the first things I noticed about the Flo pattern pieces was how different they were in the proportions of the front to the back from other patterns I have worked with.  There is WAY more back than front, which seems a bit odd if the problem we're dealing with is 'no butt.'  I have to admit that this detail is one that I have not quite figured out.  My best guess to date is that by pulling the side seam toward the front the hip curve that is usually built into the side seam, is eliminated, along with some of the extra fabric.  (If anyone else has a theory about this, and is willing to wander around in the weeds of pants fitting with me, I'm all ears!)  For whatever reason, it works.  Thanks Flo!

Check out the difference between the front of the pants and the back!!!  Whoa, can that be right? 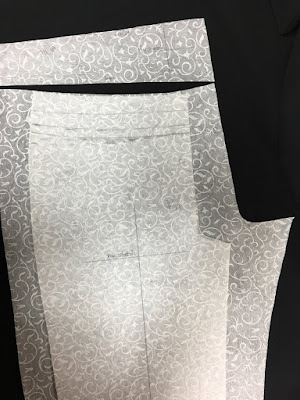 ...and finally...4.  Flo is designed to work with fabrics that have a bit of stretch.  She doesn't go all the way to 'negative ease' territory, but the close fit does allow some 'smoothing' to happen.

So there you have it...my way-too-much-detail analysis of my favorite pant pattern.

For this iteration I chose a woven stretch with good body and a fun houndstooth pattern. 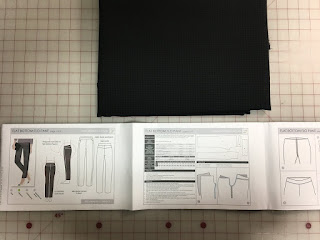 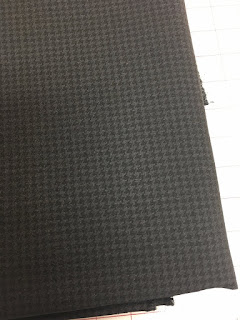 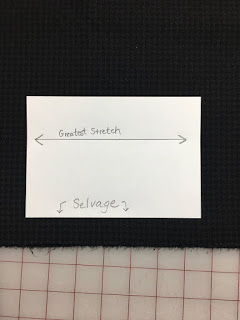 If you have ever worked with stretch woven fabric before, you might have noticed that the stretchiest direction is often with the grain.  In this case there was quite a bit of give along the grain of the piece and very little in the cross grain.  This meant that I needed to put the pattern pieces on the cross grain to get the stretch going around my body.  (this always feels a bit odd)

I'd like to say that I cut these out and serged 'em up and walked out the door with not a single glitch, but Flo and I haven't gotten to that point in our relationship yet.  (or maybe I just can't imagine making a pair of pants without trimming and restitching the crotch curve 7 times!)  These are as close to 'one and done' as I have ever accomplished.  I timed myself and it was an hour and a half from flat folded fabric to pants (sans hems).  And that included just one small crotch curve tweak.  It is very difficult to adjust for the give in any particular fabric, so I chalk it up to that!

It turns out that making a pair of black pants is much easier than photographing a pair of black pants.  The black and white versions are marginally better...
They are still sans hem.  I haven't decided what length to make them.  Having grown up in the era of being teased for having 'highwater' pants (given my height and leg length, I really had no choice!) it is still really hard to make pants too short on purpose.  I know it is fashionable, but....still thinking on it. 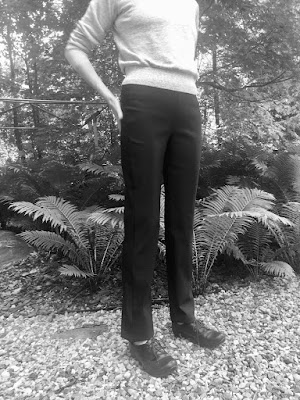 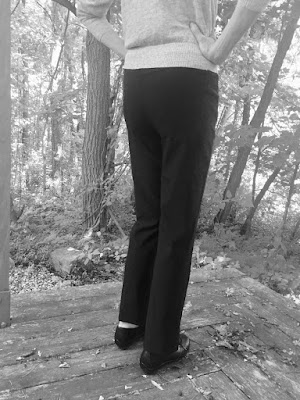 Check out Rhonda's pick HERE.
We'll be back next week with the next installment of "Getting to the Bottom Line!"