I have been noticing that many folks on Instagram or in their blogs have been doing a bit of 2020 review.  Now, I am not too excited about looking too closely at the year from you-know-where, but I did do some sewing and a little stock taking in that area is always interesting.  I find that each year there are a few themes that pop up.  Some are things that I want to remember and keep, others are, well, meh?  So here are a few observations from the past year... 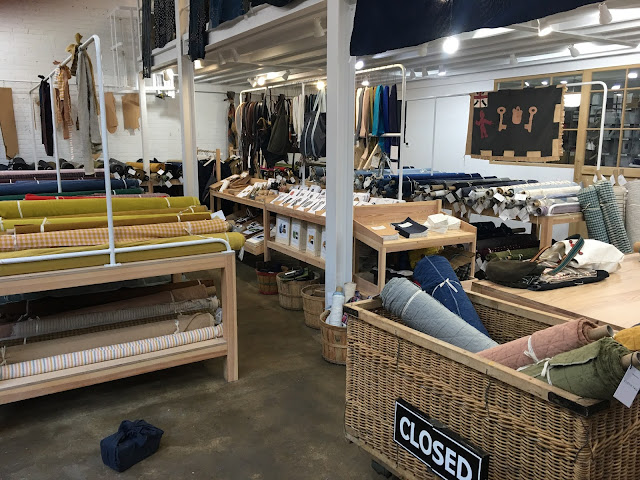 My love affair with Merchant and Mills was only enhanced by a wonderful week long workshop in adorable Rye, England.  I didn't know it at the time of course, but it would be the last time in 2020 that I actually spent time with anyone except my husband!!!!  (I do have to say how incredibly fortunate I am to have someone that, even after 34 years, I still am glad to hang out with...even though this year has definitely tested those limits.😬)

The best part of any workshop for me is getting to see things in person.  I was very surprised by the patterns I actually chose to make.  They were definitely not the ones I would have expected and I am so happy that I tried them I have used all of them several times since bringing them home to the US. 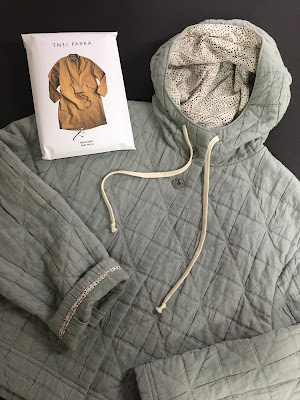 One of the themes that has dominated the past several years has been BAGS!  You may be happy to hear that the bag trend waned a bit in 2020.  Maybe since I was not going anywhere that required packing, new bags were not top of mind.  I did make the first prototype of a fold over messenger style bag/backpack.  I think it will need a few more trial balloons before it is ready for primetime.  I am hoping that I will need a new backpack in the near future! 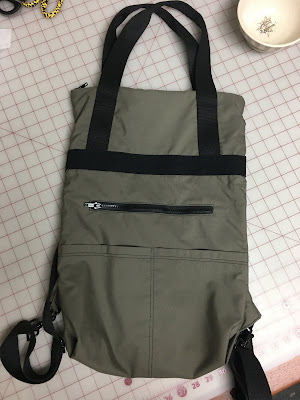 I had a last hurrah for coats.  I love making coats, wearing coats, the fabrics that coats are made from, the engineering of coats...all things coats, BUT, I will be living in perpetual summer and coats will not be an important staple of my wardrobe anymore.  So, as I was sorting through my stash and figuring out which pieces would make the cut into my new wardrobe future, there were a couple of pieces that I just had to make, whether or not they ever get worn other than for the pictures in this blog! 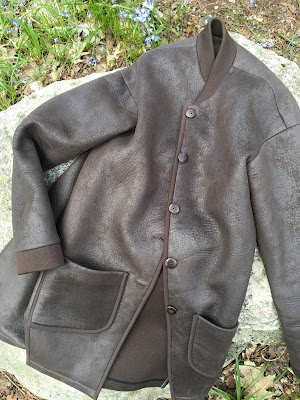 The fabric for this coat is a bit of a mystery.  Besides the fact that I can't remember where it came from, I also have no idea what its fiber content is.  It is a chunky sweater knit on one side and has a faux leather look finish on the other side.  Whatever it is I had fun making it into what my Mom would call a "carcoat."  I think that meant that the length of the coat was such that it didn't get caught in the car door when you closed it!  I don't know with this one since it hasn't even been in the car! 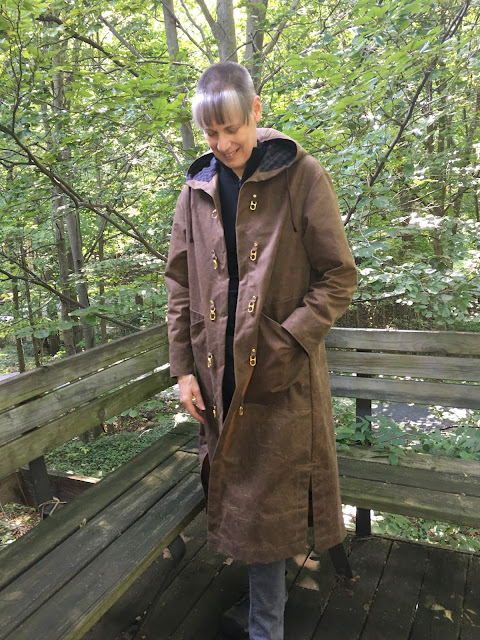 My oiled canvas mack!  THIS may be my favorite make of the year, and definitely in the top ten of all times.  The fabric is of course from my first trip to Merchant and Mills.  The pattern is a hack of the one that I tried out during the workshop and the closures came from a marine hardware store in the middle of London.  I may have to take some treks to Wales so I can wander around in the rain!  (Let's hope that can happen soon.)
Along with coats, robes made several appearances in my sewing room this year.  I made one for myself from another lovely linen waffle weave from M&M.  I used the selvedges as the front edge finishes and made as few cuts as possible to shape the neck and shoulders.  I was so pleased with it that I made another version in a light weight linen and then I decided to make a whole pile of them for all of my peeps for Christmas!  What else do you send people who haven't been out of the house in nine months?😫 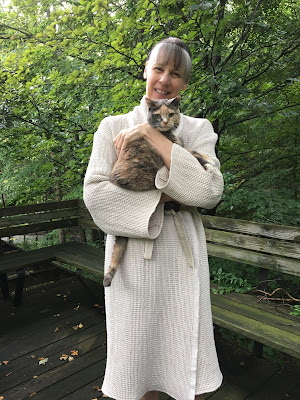 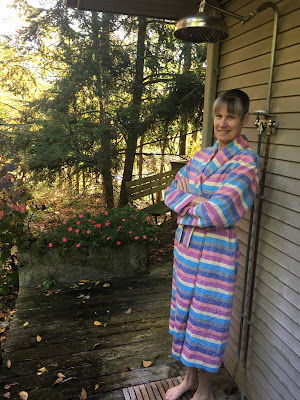 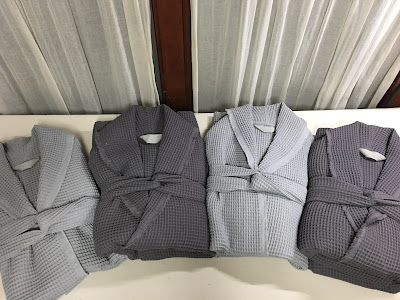 There were a few projects that really helped me cope with all of the crazy that is swirling around us.  They came at different times and seemed to fill a creative or emotional need.
In, what Dave Barry in his 2020 Review calls, "Marpril" I, like the rest of the world, was reeling each day as the news or the rumors bombarded me with dread and hopelessness.  Any spark of creativity was totally extinguished and the idea of sewing seemed so trivial.  I did realize that my sewing is what has sustained me through other trying times. (although I have to admit to being lucky that there haven't been many and none can compare to 2020).  When I finally sat down at my sewing machine I just started to stitch.  I wasn't sure what would appear...it turned out to be a hat...of sorts.  It wasn't much to look at, but making it felt doable, and familiar and was what I needed. (BTW, if you haven't read the Dave Barry piece, do) 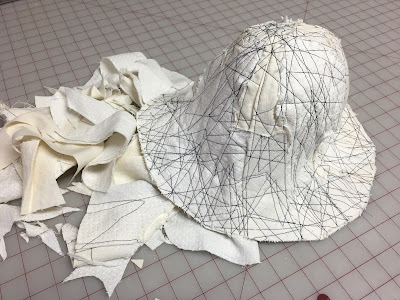 I of course made my contribution to the mask inventory.  It was harder than I thought to make them.  I knew they were needed, but I so wanted it not to be the case.  I never expected that they would become a wardrobe staple for all of us. 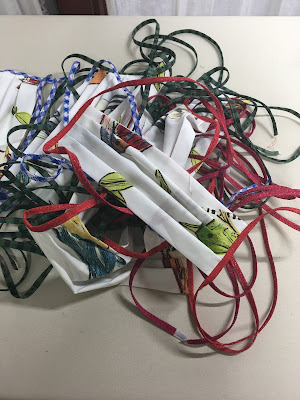 Just as we went into hiding, I had started a project for Threads Insider.  It was a challenge to take a men's suit and reimagine it into a new garment.  I put it aside and didn't get back to it until later in the summer and at that point it was the perfect puzzle to keep my mind from complete mush!  (I had also put together way too many jigsaw puzzles and was ready for another distraction.) 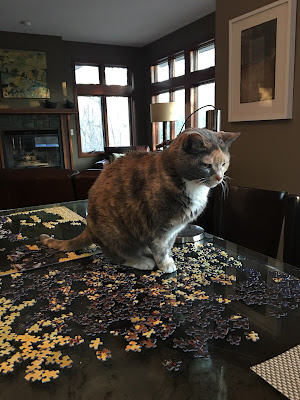 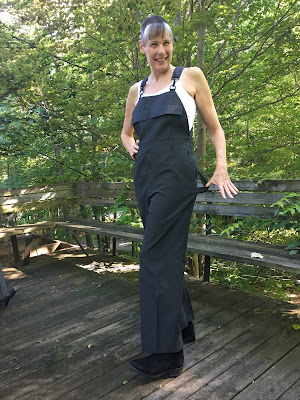 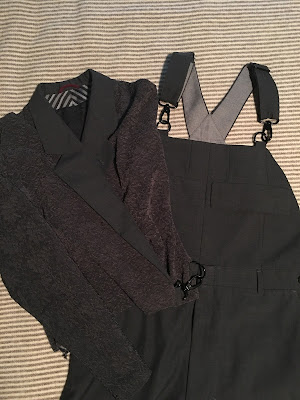 I spent a fair amount of time sorting and organizing my sewing room not only because it was SOMETHING to do, but also anticipating our move to new houses.  I came across a huge linen tablecloth that had been one of my mother in law's wedding gifts.  I had saved it thinking that it would be a tablecloth on one of my tables at some point...that has become a very remote possibility, but it sure looked like 'fabric' when it came out of the trunk this year.  I made two dresses, one for me and one for my sister in law...and still squeaked out a top.  I never imagined the emotional connection that working with that tablecloth made for me.  Again, right project, perfect timing. 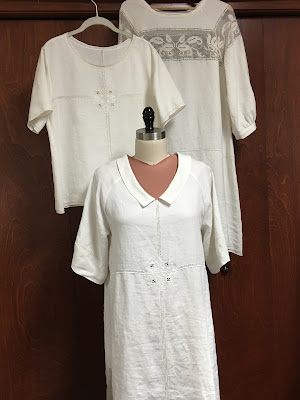 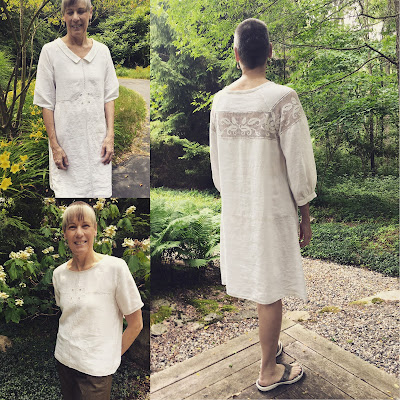 Along with my sewing projects I found myself spending a lot of my time in the kitchen, which is not my usual thing.  By mid June I realized that I had not cooked that many days in a row...ever!!!!  I desperately needed some inspiration in the realm of meal planning!
We had been planning a lovely trip to France this summer which was obviously not going to happen.  I decided that we should take a virtual trip to France.  (I have since heard people refer to this as a "Fake-cation!")  I collected several Provencal recipes and looked for things that we could do that were 'safe.'  We watched french movies,  did a Matisse jigsaw, visited a lavender farm near us, baked french bread, and of course consumed a fair amount of wine!  I was surprised how much it helped to have new recipes to try and things to do.  So when we got back from virtual France we took a virtual road trip and "visited" 15 different US states and tried their signature foods!  I am still enjoying some of the new recipes that I discovered on our fake-cations. 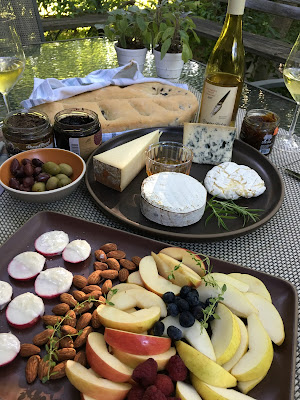 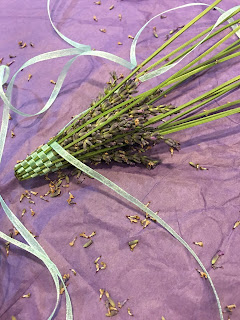 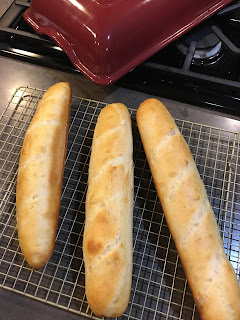 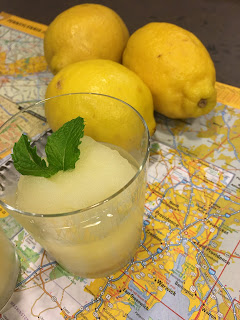 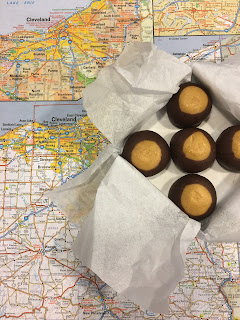 After months of wondering if we would ever get to our new home in Key West, we decided to make the trip.  When we finally got ready to pack the car, it was the sewing machines and the cat that made the cut!  It was definitely not the most enjoyable road trip we have ever taken, but we made it and are now busy getting to know our new place.  It will take some time, since knocking on the neighbors doors and introducing ourselves is not on.  But I'm hopeful that it will be possible very soon.  I am also busy planning and collecting things for my new sewing space which I can't wait to share.  It feels like the perfect way to start a new year. 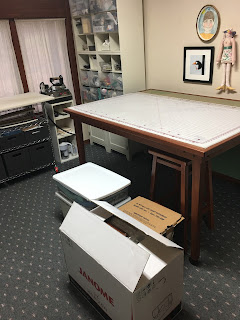 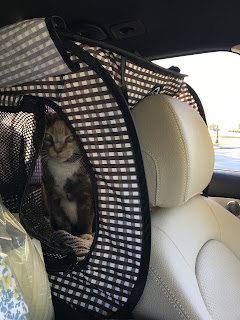 Looking over the things that I made this past year makes me realize, again, just how NOT normal 2020 was.  My projects seemed random and, for as much time as I spent at home, relatively few.  Moving into 2021 I am cautiously optimistic that we might find more balance and stability, but I am not going to make any plans just yet.  Staying put in our new house and preparing for when we might again welcome visitors is about as far as I am willing to go at the moment.

I am so grateful for the community of sewing folks that are part of my life.  It has not only been the actual sewing that has kept me going, but the amazing people who choose to create with scissors and cloth.  Being able to "zoom in" with sewing friends and virtually visit with sewing people all over the world is a true bright spot this past year.  It is also humbling to be part of a group that has rallied their talents in a time when there is so much need.  I thank you, and wish you a new year filled with hope....and sewing! 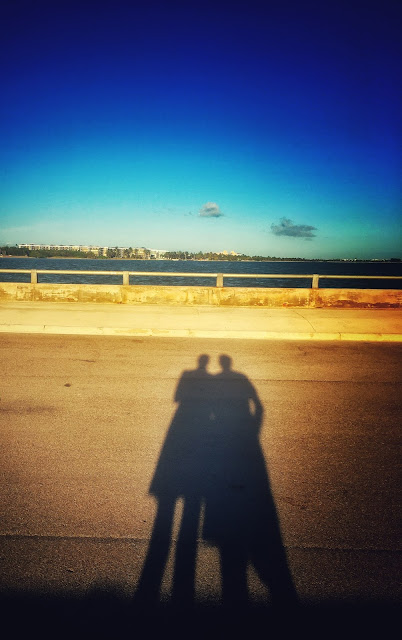