Do the Part You Know

I'm not sure what it is, but every so often I feel the need to upholster myself!  The big bold prints of decorator cottons just call out to be made into some kind of wearable something!

I got a pattern earlier this spring when I was collecting possibilities to take out to the DOL retreat.  I thought it was really cute and a simple shape that would be a great jumping off point.  I didn't actually use it at the workshop, but got it out the other day when I found (and couldn't resist) a great cotton/linen blend drapery fabric.

I got the fabric home and washed it several times and dried it with a couple of tennis balls to get the sizing out of it and soften it up.  It came out nicely 'rumpled' just the way I like my linen!

I made a 'trial balloon' of the pattern...as simple as it is, I still needed to adjust the shoulder to get the dress to hang right.  I have very broad, square shoulders and the curve of the cap sleeve was hanging up and not laying comfortably over my shoulders.  It was my normal adjustment to the slope of the shoulder seam that did the trick. 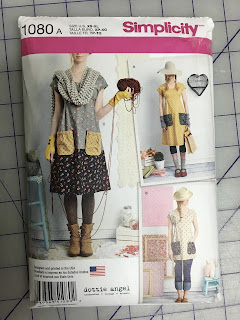 I had very large print drapery yardage and a very simple pattern, and no idea where it was going!  I started collecting from my stash.... 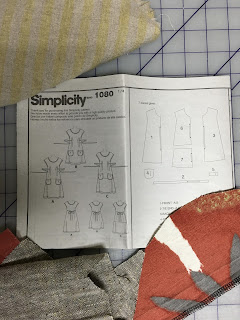 The simple pattern pieces (actually ONE pattern piece.  When I compared the front and the back pieces, they were identical!) were a good choice for the extra large floral print of my fabric.  As I was draping my dress form for pattern placement, I decided that maybe a long version would be cool, and because I love bias, maybe a bias cut.

Long and bias meant that I would have a very long skirt on one side and a very short skirt on the other side.  I didn't have enough floral print to piece the extra length...so more experimenting.  I found a rough woven linen scrap (I think it was used for throw pillows at some point!  Perfect for the 'upholster myself theme) that actually had some of the mustard and coral colors of the print in it that I could piece for the hem.  Since that's the part I knew, I went about making the hem first. 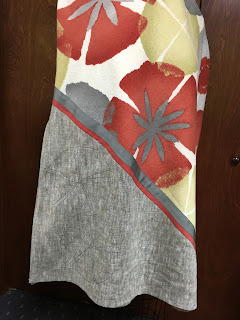 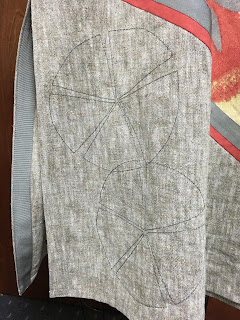 As I was scrounging for the hem fabric, I also found about a 3" piece of coral colored linen and of course, my favorite, some gray petersham ribbon.  I echo stitched some of the floral shapes onto the linen to add some interest and pieced the coral linen and petersham to add a little extra length.  I lined the inside of the side slit with the petersham as well. 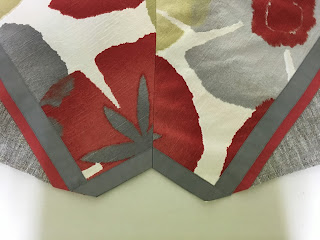 As I was piecing the hem I messed around with the ribbon and really liked the way the ribbons intersected at the side seam.

When I cut out the pattern I knew I would also have to piece one of the shoulder sections (front and back), but hadn't made the decision about what to use... 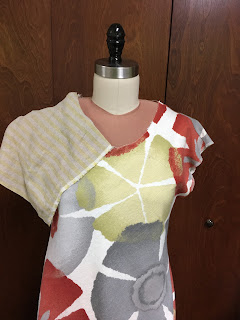 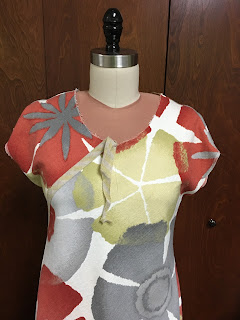 Tried a striped linen...not so much...settled on the floral with the stripe covering the seam.

I had made my way to the neckline...

When I covered the pieced seams for the shoulder section I had left long 'tails' of the stripe, just in case, and because I didn't know what I was going to do. 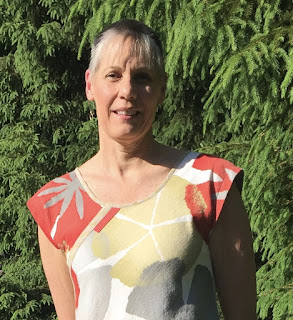 On the front I opted to finish the 'tail' at the neckline....

On the back I extended it and made a 'strap' that attached at the opposite shoulder. 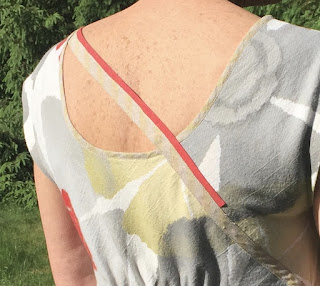 So...I worked my way from the hem to the neckline making decisions as I got to them.  I love the way the dress turned out (I will definitely make this one again!) and I enjoyed being surprised along the way.  An exercise in "do the part you know."  It's a really fun way to work, and keeps you guessing till the very end...(which may not always be the hem!) 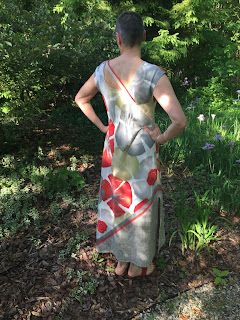 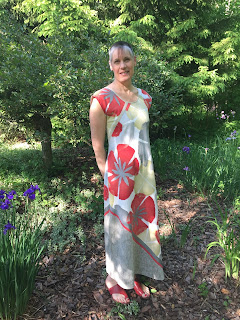 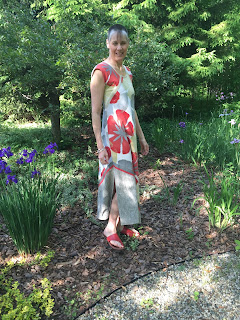 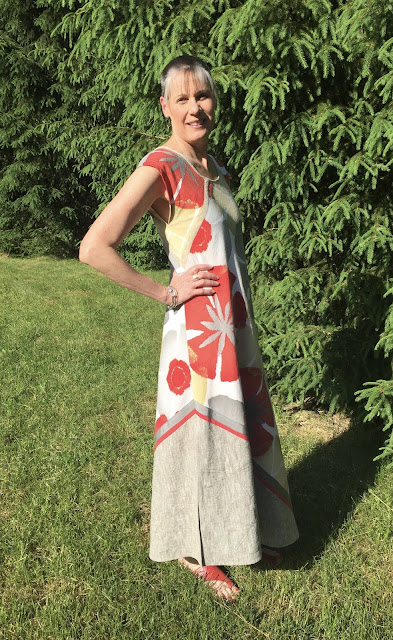