Every so often I have to catch up on my knitting.  I take my knitting on trips because it's portable, easy to pick up and put down and keeps me occupied while waiting, riding, training, planing.  But there comes a time in the life of each project that makes it no longer a travel project.  Sometimes it gets too big, sometimes there are fussy bits that require counting or some other version of paying attention, that are not conducive for airport lounges.  When that happens the project gets moved into 'The Pile' and another project gets started.  You can probably see what happens after awhile.  I have to take care of The Pile before I forget what I was doing.  Sometimes finishing a project becomes 'frogging' a project because I can't figure out where I left off, or I just don't care anymore!

Last week I tackled The Pile, which had two mostly finished summer weight sweaters in it. 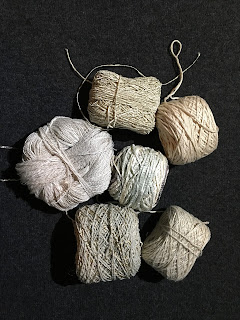 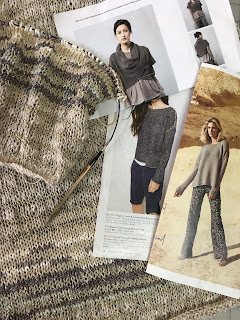 The first project was a 'leftovers' sweater.  I had several skeins of linen and cotton yarns in various shades of natural and off white that were leftover from other projects or purchased because they were just too lovely to pass up.  I decided to make them into a stripy oversized T-shirt. 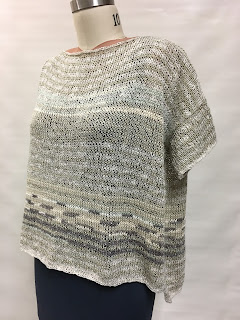 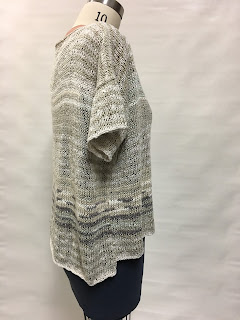 I am happy with the resulting T-shirt, it has a very drapy hand and hangs close to the body so it doesn't look too oversized when it's worn...but, I now have several 'nibbins' (as a knitting friend calls them) of various linen and cotton yarns.  I think I will call it good!

The other project was one that I started while I was in Key West this winter.  There is a cute little fabric/yarn shop that really needed me to patronize it and I obliged by buying a yarn that was lengths of several different yarns strung together.  When it is worked it makes blocks of the different textures and colors. 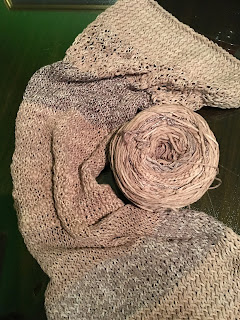 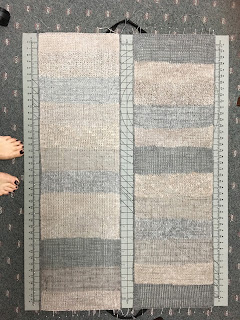 The plan was to knit two long pieces about 12 inches wide and sew them together to make a V-neck top.  Pretty simple idea.  I realized after knitting the first ball (I had 2) that it was going to be a wee bit on the short side.  Of course there wasn't a third ball of yarn, and the yarn was several different yarns anyway so I picked another yarn and added it into the mix to get the length I needed.  I also used it to finish the edges and sew the pieces together.  It ended up being way more complicated than I planned, but it worked out in the end. 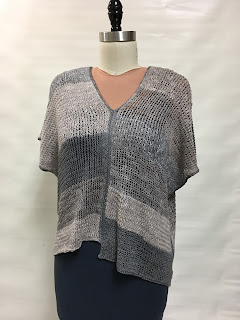 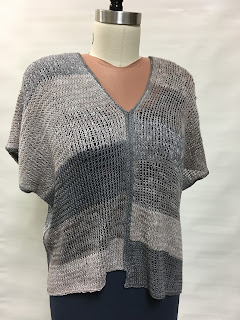 I still have an alpaca sweater that has become way too big for traveling and have started a cotton cardigan that has jumped the queue because I am way more excited about cotton right now than alpaca, so it won't be too long before The Pile will need tending again.  Until then, I'll be looking for some fun destinations to get my knitting done!