A Little Bit of Fall Color

Like all of the seasons this year, Fall has been a bit different.  By this time in most years we would be enjoying blazing red maples and golden oaks in every direction.  But things are staying pretty green and I'm thinking we may just go from green to bare on the first blustery day. 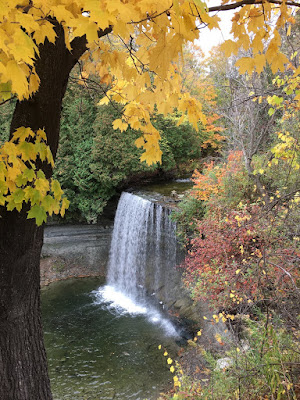 I did get the chance to take in some fall color on our recent road trip around Lake Huron.  Our color timing was perfect  as we rounded the north end of the lake in Ontario.  Crisp mornings, sunny afternoons, a bit of rain just to remind us that winter is just around the corner.  It was just the break I needed and really got me in the mood for fall.  And fall sewing. 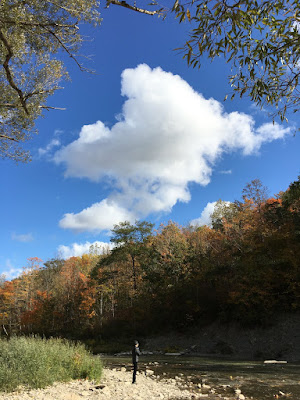 I'm never sure which is my favorite...'wool season' or 'linen season.'  I guess it depends which end of winter I am sitting at!  But right now I am all about the wool.  For several years now I have been saying that I need to make a new travel jacket.  I have a Michael Kors black wool knit jacket that I have worn for years when I travel.  It is just the right length, just the right weight, I can sleep in it on the plane and then wear it out to a fancy restaurant...it just works!  However, it is starting to show the years and the miles.  I realized that I will keep on wearing it unless there is something to take its place.  I'm heading out to Sonoma for Thanksgiving so I decided that now was the time to get 'er done!

It wasn't that hard to find a candidate in my stash.  I collect wool jerseys the way quilters collect fat quarters, so I had plenty of options.  I chose a bottle green wool jersey that is quite heavy.  I hoped that it would give me the tailored look that my old jacket has without having to add much structure.  I had made the Merchant and Mills Ottoline (read about it here) jacket earlier this year out of an Italian linen and really loved the style and fit.  With a few tweaks I knew I could make it work for the travel jacket I had in mind.  Because I had such a specific idea in my head I was a bit nervous about whether I would end up with what I wanted or end up disappointed and still wearing my old black jacket.  But I am happy to say that it turned out just great!  I am so pleased with it. 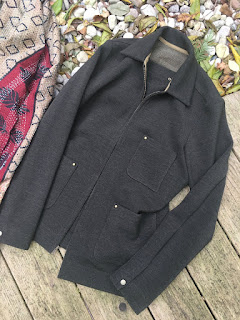 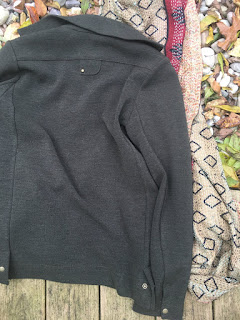 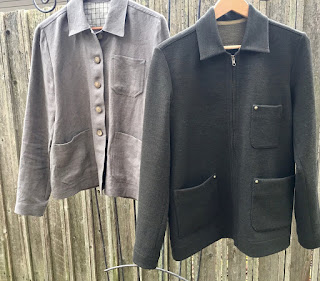 I did start with the Ottoline, but made quite a few changes.  I put a zipper instead of buttons.  I didn't even consider trying to put button holes in the heavy jersey.  I covered the zipper tape and the collar seam with a narrow Petersham ribbon to finish the inside since the jacket is unlined.  I used snaps at the cuffs and vents, again to avoid button holes!  I lengthened the jacket to just cover my tushy, which is one of the things I like about my old jacket.  The pockets have a round corner and a square corner and I added little brass rivets for fun.  And there is a little baby 'pocket' on the back yoke.  I used a lighter weight wool to line the yoke so it wouldn't get too bulky. 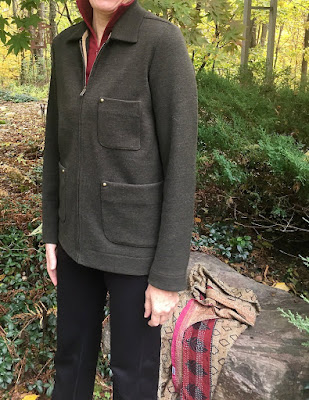 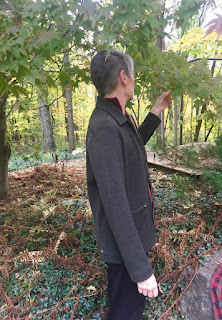 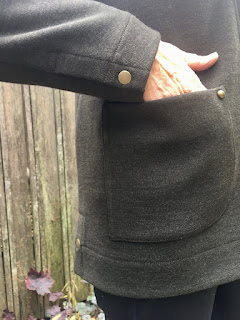 I can't wait to try it out on my trip to California.  I think it will be just the ticket!

While I was in the travel mode I decided to try and make a version of my go to travel shirt.  I have a whole drawerful of Smartwool quarter zip shirts that have become the only shirts I pack anymore.  Again, perfect weight, go wherever I want to go and so easy to wash and dry on the road.

For my shirt I found an absolutely gorgeous cranberry colored jersey.  Again I was nervous that I wouldn't get what was in my head, but the sewing Gods were watching out for me and it is just what I I had in mind.  Two for two...it was a good couple of sewing days!

Most of my Smartwool shirts have exposed zippers, but the only zipper I had that matched was an invisible one, so that's what I used.  I had to put a seam in the center front to accommodate the zipper and I really like the finished look. 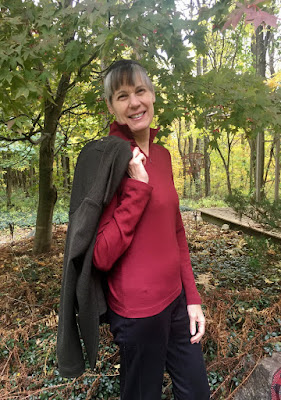 I'm pretty proud of the matching job I did at the center front collar seam and I didn't even get one of those annoying dimples at the bottom of my invisible zipper! 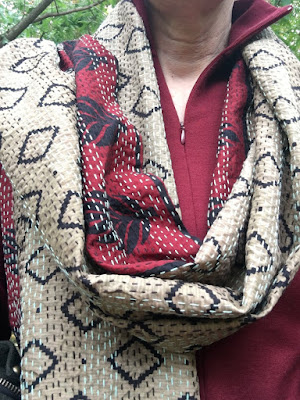 I had such great success with my two new travel pieces that I am working on a third...it's a dress that I think I can wear as a jumper with the shirt...we'll see if the sewing Gods hang in there!  They do say three's a charm!  Even if the dress crashes and burns, I am ready to roll with my Smartwool quarter zip and my wool jersey jacket.  Bring on the TSA! 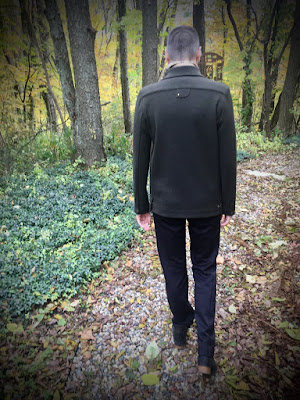 Just so you don't get the idea that I have completely fallen off the planet into the 'backpack twilight zone'......

I was at the lake house and didn't have much in the way of projects, but I did have a couple of remnant pieces that I had picked up just because they looked like they should be together in something.  The something turned out to be a tote bag. 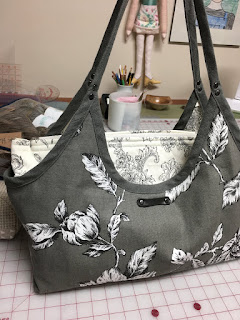 ...am I right?  The fabrics really do need to be together....and of course, I didn't have enough of either one to make the lining so I decided to have some fun.... 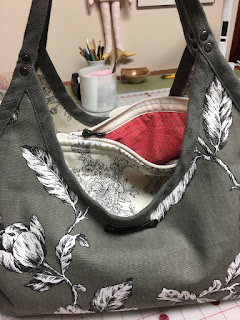 I love the hot pink on the inside!  I used bias cut strips of a coordinating linen to make the straps and put some rivets at the pressure points to make them stronger.  Right now it is on probation as my knitting bag...we'll see...

Speaking of knitting 😉...We have a lovely Fiber Festival here the middle weekend of August and I get all inspired.   I figure I better finish the old projects before the shiny new ones suck up all the attention!  So sometime around the middle of August, I usually haul out the knitting projects that I started in the wintery months that got put aside for the summer.  I make one last stab at finishing them in time for the next round of wintery months.  If they don't make it, I figure I better just frog 'em and start again.

This year's UFO was an amazing alpaca cardigan that just needed one more sleeve...technically it still isn't finished, but I figure putting snaps on isn't technically knitting, so I'm counting it!  (I have yet to get a picture of it so that will have to wait as well.)  BUT...feeling all righteous about a finished project, I dove into another one right away....feeling even more righteous, because I was using stashed yarn!

My cardigan was a rather large project on small needles, I wanted an easy, fast, instant gratification type project.  Nothing that was going to hang around for too long.  Big yarn on big needles!!!!!

I'm sure the yarn that I pulled out came from the sale basket in a darling little yarn shoppe somewhere, but heck if I can remember.  I'm making this assumption based on the red lines through the original prices and new, lower prices written in the same red ink, AND the fact that there were three colors of said bargain yarn, none of which was enough for a sweater.   The yarn was however, BIG.  And really soft and cozy.  A blend of wool, silk and cashmere, yum!  I watched a You Tube about "jogless color changing" and started knitting....I really didn't have much of a plan.  I just kept making decisions when I would run out of yarn...I am rather fond of the result! 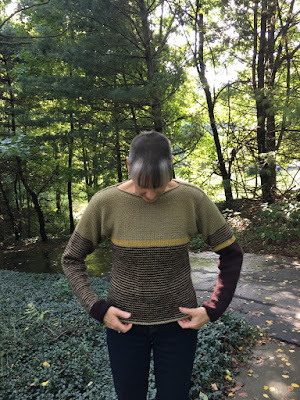 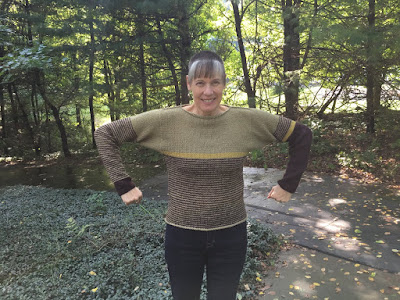 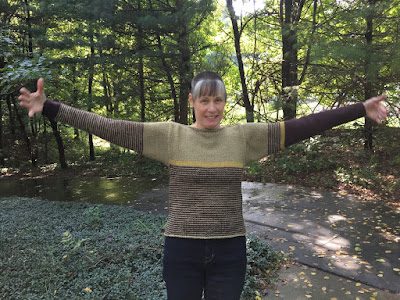 Having finished a UFO and used up a wad of my stash yarn, I felt quite justified in loading up at the fiber festival!  ...and I made sure I will have enough to make a whole sweater this time! 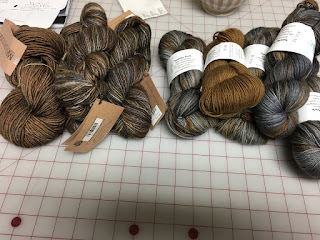