Easing into My New Sewing Home

Don't get too excited...the resulting product is not as impressive as the fact that I SEWED!  I have been so busy making a sewing space that I had forgotten why I was doing it in the first place.  When I finally did get in there to do some actual sewing, I realized that I had done a darned swell job setting up my work space.  Things were at the right height, the surfaces were big enough for their intended use, the spacing between work stations was very nice and in the right order...you might think I had done this a time or two 😉...so what did I sew?

The first thing I did was re-make...for the third time...a pair of linen pants that I bought a few years ago.  The first redo was to lengthen them.  The second was to rework the drawstring waist into a knit waistband. 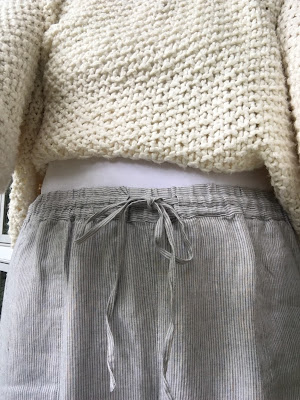 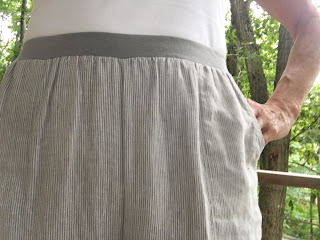 And the third was to put the drawstring BACK on!!!  (OK, I'll fess up, that I also took about 4 inches out of the circumference of the pants, which made a big different, as you can imagine.  The drawstring didn't have to work nearly as hard as in the original version.)  Since I had long ago discarded (or perhaps it is still lurking about in Michigan somewhere?) the first waistband and drawstring, I needed to make a new one.  I used a piece of tropical print batik from my neighborhood fabric store.  The light weight of the fabric was just perfect and the little bit of print for the drawstring made these old pants feel new...again! 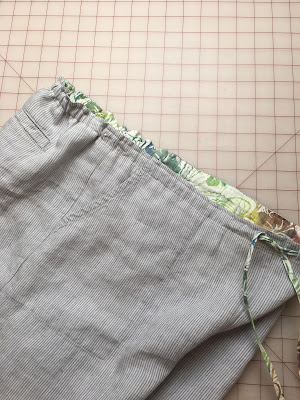 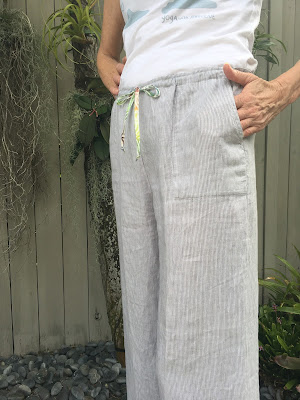 We'll see how long this iteration lasts.
Since I was on a wide pants kick, my second project was to make a pair of PJ bottoms.  I had a piece of really soft cotton lawn that looked oh so tropical.  What I didn't realize until I started to lay out my pattern is the palm tree design is directional.  I thought about ignoring that annoying little fact and making my pants with upright palms on the front and upended trees on the back...hey, they are PJ's, who cares?  Well, I did.  I knew it would drive me crazy even if I couldn't actually see it.  (Is there a clinical name for that?!)  So instead I made them with all the palms growing up and just let them finish where they finished.  Upside down palms I couldn't handle, but cropped PJ bottoms...OK. 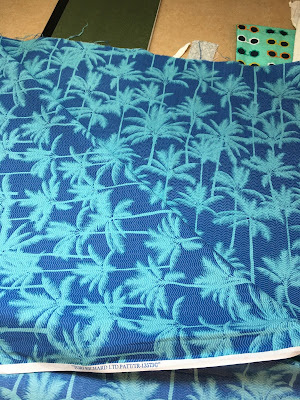 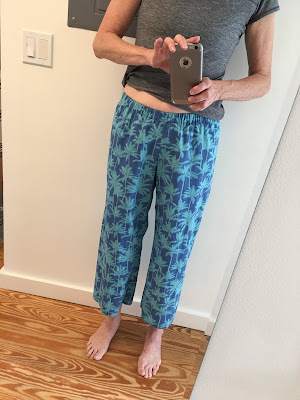 This next project needs a little introduction...
When we were acquiring the necessary kitchen equipment to get us started here, the need for oven mitts became one of those things that you can't believe you are spending that much time trying to figure out!  We got some that looked like perfectly adequate oven mitts, but soon realized that basically we kept burning our arms and sticking the mitts into whatever hot, gooey mess we were trying to retrieve from the oven.  We both wanted the "ones like we have in Michigan!!!!  Waaaaaa!!!!   Said mitts are simple mitten shaped affairs made out of neoprene.  They keep us away from hot stuff, but are much more maneuverable than the clumsy, quilted ones we were trying to use.  The hunt for neoprene mitts was on!  ...and on...and on...with no luck!  How hard could this be?  I finally decided to get some fabric and make them.  (I have a sewing room!)  I found different neoprene fabrics, but had no idea from the descriptions whether they would be thick enough to do the job.  I ended up opting for two neoprene lunch totes that I could cut up and make into mitts.  Like I said, way too much time on my hands.  But I did end up with oven mitts very much like the ones we like and they are doing a fine job, and aren't they just the cutest?! 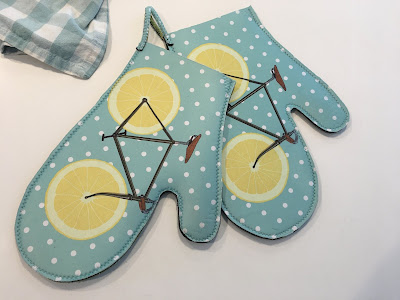 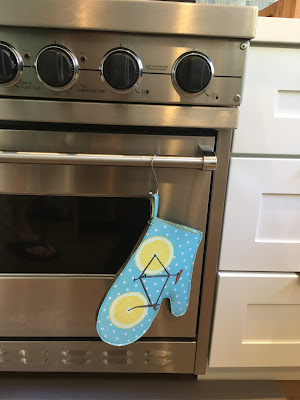 This last project was actually done before the sewing room was ready.  I had unpacked my sewing stuff to measure and figure out what size tables I would need and, well, since it was out...and since I had found a lovely rayon challis around the corner...
I made a simple dress using the Monty shirt/dress pattern from StyleArc.  I made a tunic top with the same pattern using similar fabric and have been wearing it a lot.  The kitchen counter worked pretty well for a cutting table although my new one is waaaaay better!  The dress feels cool and easy and the colors remind me of the sea. 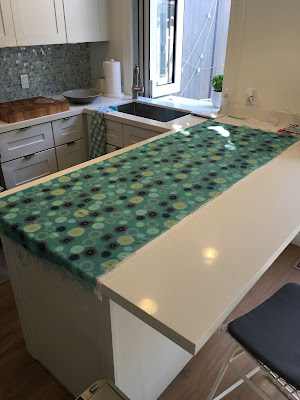 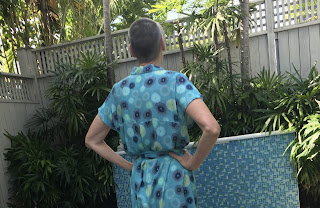 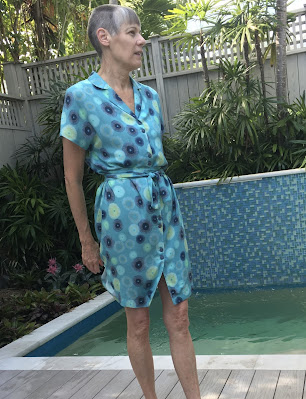 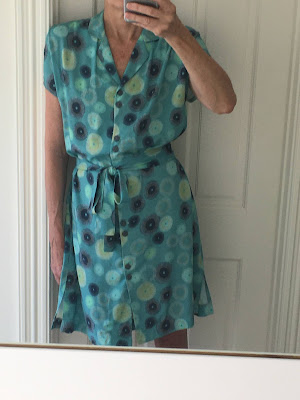 ...I even had buttons in my "stash" that worked perfectly!
I'm starting to feel some southernmost sewjo....👍
Posted by Becky at 2:57 PM 8 comments:

One of the "must haves" that we put on the list for our relator last year when we were looking for a house in Key West was a dedicated space for me to set up a sewing room.  It seemed like a luxury, but I knew that I wouldn't feel at home without somewhere to sew. (My husband was totally on board with this knowing what it is like to live with me without a project to work on!)  As we visited houses, it was clear that this might be a bit tricky to accomplish.  But our relator came through and we ended up with a lovely loft room that is perfect for a sewing space.  Because it has very sloped ceilings it wouldn't work for much else IMHO!  Since arriving in November, I have been collecting furniture and fixtures that fit the space and create a darn tidy sewing room!   Before I could actually move into the space, we had to redo the A/C and do some work on the stairs that access the loft.  (which are outside, how cool is that?) I am very excited that the work has been done and I can move in and sew.

The first thing I wanted to make was an ironing table like the one I have in Michigan.  I can't believe how long it took me to make the first one and now I can't imagine going back to a wobbly folding ironing board.  I did a post about how I made it for Threads Insider.  I'm not sure when they will post it, but it has all the info about how I did it.  I also posted about how I made the first ironing table  Here  The main thing I changed when I made the new one was to get a length of industrial wool felt for the top.  The stuff is 3/4 of an inch thick and OMG does it makes a wonderful ironing pad.  I am in love. 😍 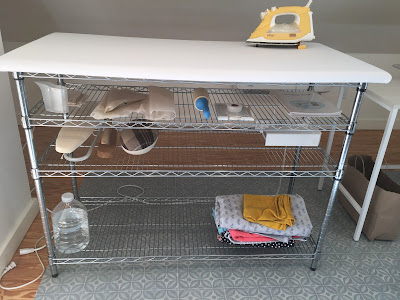 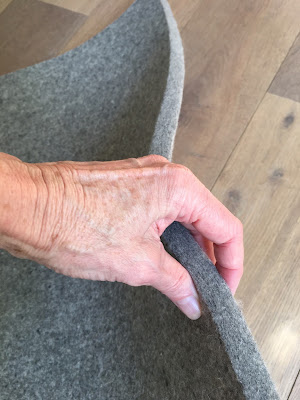 In the picture you can see the iron I brought with me, it has been just fine for years..but...every time I have tried it here it has spit water all over the place!  I hate that!  I have tried all the different types of water, and temperatures, all the iron tricks I know and still water, water everywhere.  Nope, that wasn't going to work.  I just did it!  Got myself a Reliable Professional Steam Station  like I have in Michigan.  Let's call it a Ground Hog's Day present. 😉 Isn't she lovely?! 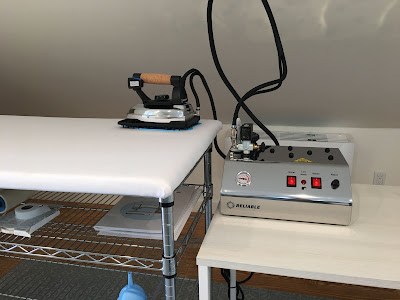 My ironing table is made with wire pantry shelving and a piece of MDF board.  Since I had to get 6 foot shelves I had some extra supports...and since MDF comes in 4' X 8' sheets, I had a lot of that left!  I used the shelves as 'legs' for a cutting table.  The left over MDF was a generous 6' X 4' and works just perfectly for a cutting table.  I love a "no waste" project.  After much banging and crashing.... Voila! My cutting table!  With lots of shelves for storage.  She's a beaut! 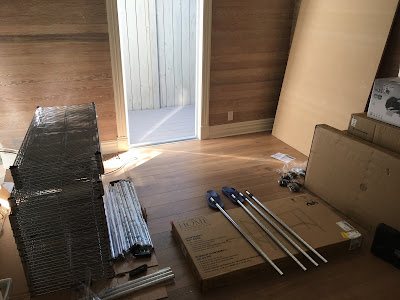 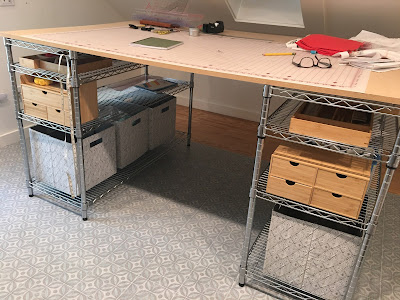 The reason that we had to redo the A/C was that it had been leaking onto the floor.  When we got here we had this lovely staining and a really warm loft!  😟 The holes above the window are from removing the offending appliance, but what to do about the floor?  Other than the stains the floor was fine and sound, so I decided a rug would be the solution for now.  But a rug in a sewing room, hmmm?  How about a vinyl rug?  Thank you Home Depot!  I got a 12' square of sheet vinyl that is soft under my feet and covers the floor until we decide if a new floor is in the cards. 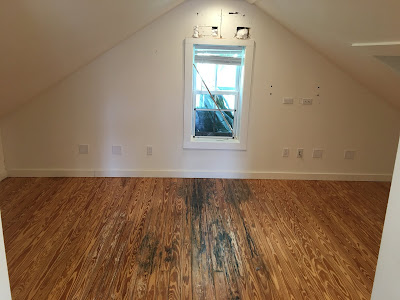 I wasn't sure if I would go whole hog and get a dress form but after the iron incident I decided I may as well get fully equipped...let's call it a Valentine's Day present! 💖😂 And isn't SHE lovely.  All padded out and ready to go to work! 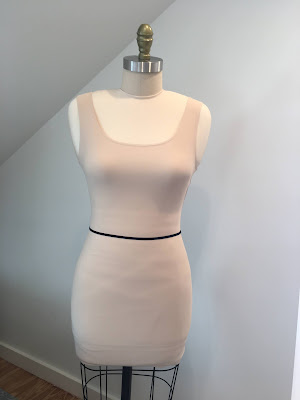 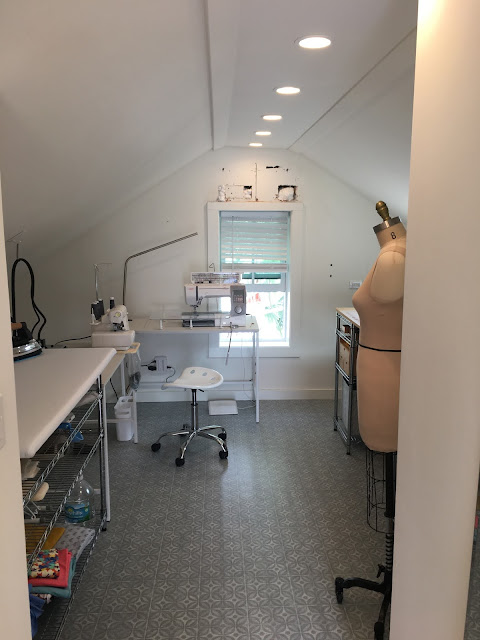 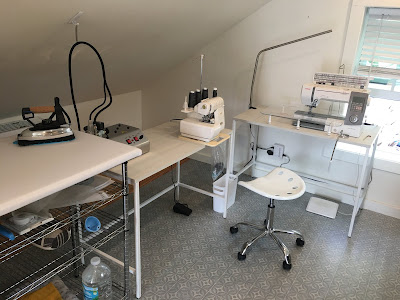 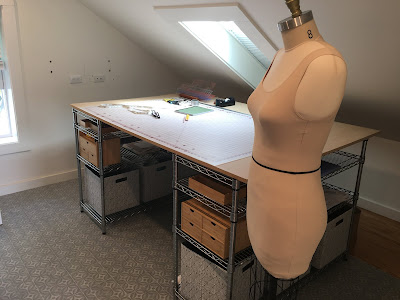 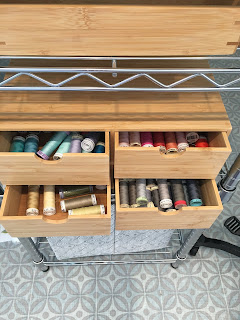 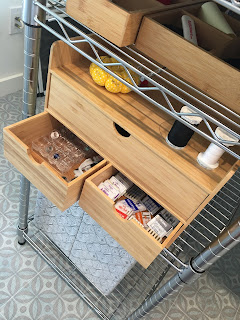 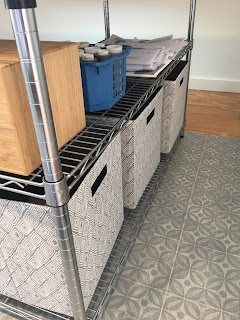 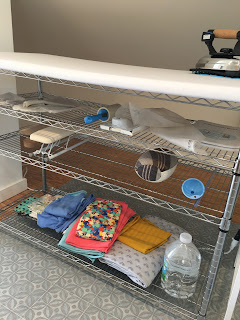 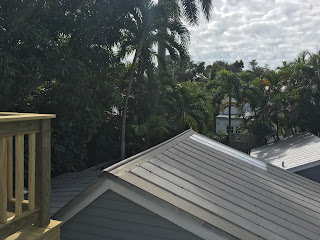 It seems like a long time coming...I have been imagining the space for almost a year and to finally have it ready for a project...Yikes!  The paralysis of the empty page!  I may just sit and soak up the vibes for a bit before I dive into the maiden sew. 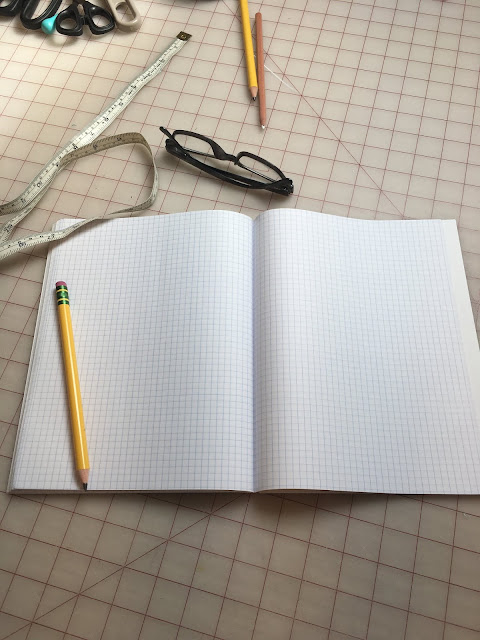