Eve of the Unknown

Let's get the elephant in the room out of the way...
Yes, I am weary of living with no knowns.  Yes, I am grateful for the relative ease that my situation has afforded me.  I am safe, fed, sheltered, loved and clothed!  I have been trying not to start sentences or thoughts with "when this is over...." I am starting to say things like, "I'm glad I know how to use Zoom"  or "I never would have thought a virtual birthday party would be such fun!"
For now, I will do now.

...and yes I am soooo very grateful for my sewing.  It is the one place that feels somewhat the same.  I can still get lost in a project and still obsess over thread color and crotch curves.  I think because it is mostly a solitary thing, it has much the same feel as before solitary was mandatory.

I actually haven't been sewing as much as I thought I would at the onset of the quarantine.  The strange spring weather in Michigan has also been hard to figure out.  My fingers are ready to be deep in linen, but the temperatures still say wool.  When I returned from my workshop at Merchant and Mills I was excited about the pants I had made there.  I tried the Eve pant pattern and ended up really, REALLY liking it!  I made it in a lovely linen at the workshop and then again when I got home in an ivory colored cotton drill. 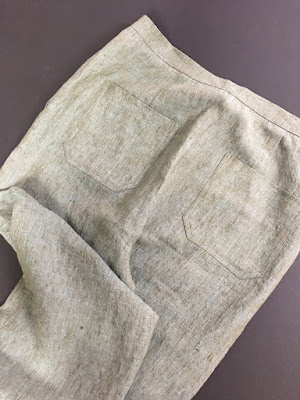 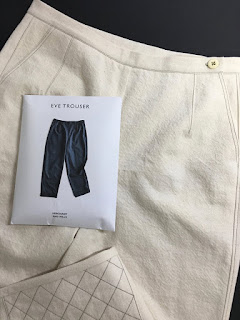 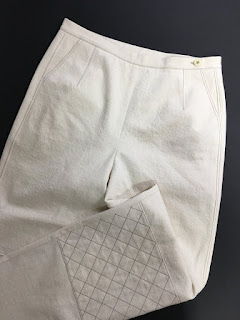 I love the fit and the relaxed style.  I was thinking that warmer weather was right around the corner and I would be wearing them by now!  Not so much....

I had stacked up a couple of other potential fabrics to make a few more pair when the thought occurred to me, "Do I like wearing them?"  It is one thing to try them on and fuss with the fit, but actually wearing them and going about a normal day in them...hmmmmm?  I decided I should do a test drive and see before stocking up on them.

The two versions I already had were not going to cut it in 40 degree, rainy weather.  I would have to have my long underwear!  So I found a piece of some kind of suiting blend that I had gotten who knows when for making who knows what...there was enough yardage to make the pants and that was all I needed. The pattern goes together really quickly and in a few hours I had another version of the Eve pants in weather appropriate fabric for my test drive. 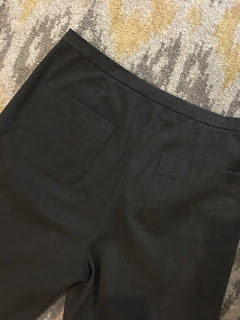 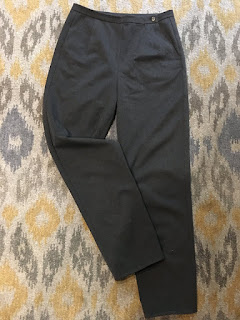 Well!  Bingo!  I haven't worn anything else since I finished them.  My instinct told me they were good, but the wear test really confirmed it.  These are officially my favorite pants (right now!)  Even in tacky brown mystery fabric!  I did make one addition to the pattern that I think was absolutely necessary.  The pattern as written does not include front pockets.  I don't know about you, but I want pockets in my pants!  I added slant side pockets and put the opening inside the left side pocket.  It work liked a charm.  Pockets and no zipper in one go! 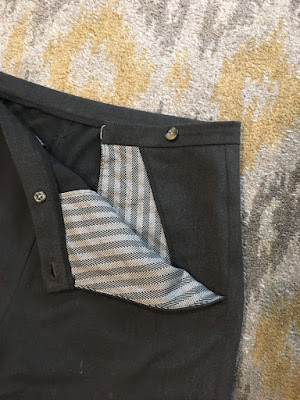 So, until the weather decides to actually act like summer, I am happily wearing my mystery fabric Eve pants.  I'm pretty sure there are a few more versions in my future.  (one unknown taken care of!) 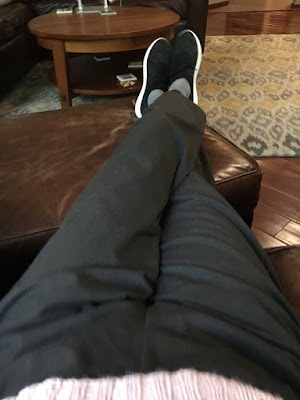